Woman of Talent and Courage
by Mary Hilaire Tavenner, Ph.D.

Helen Steiner Rice is possibly America's most prolific poet. She lived nearly 81 years and it's impossible to relate all the interesting things about her within the limits this brief article. For every fact included, a hundred are left unstated.

Both of Helen's parents came from farms near Wooster, Ohio. Anna Bieri, her mother and family were from Switzerland, her dad, John Steiner, was of German decent. When John got a job with the Baltimore & Ohio Railway, the two married and moved to Lorain, Ohio.

Helen Elaine Steiner was born on May 19, 1900. Her only sister, Gertrude was born on November 2, 1902. The family worshipped at 20th St. Methodist Church in Lorain. Here Helen attended and even taught Bible School. As a youngster she thought of becoming a preacher.

In Lorain, Helen attended Garden Avenue, Garfield, and Lorain High Schools. She published poetry in the Lorain Scimitar in 1916 & 1918. Her plans for after graduation were to go to Ohio Wesleyan for a liberal arts degree then Ohio State to get a degree in law. She had thoughts of becoming a congresswoman. However after graduating from Lorain High School in 1918, she got a job at Lorain Electric Light & Power Company.

A few months later her father died suddenly in the worldwide Spanish Influenza epidemic of 1918 at the age of 46. He was buried in the local Elmwood cemetery. Helen's dreams for college were now impossible. She continued her job to earn an income for her mother and sister.

While at the Power Company she learned to decorate lampshades and taught other women how to do this. She was soon promoted to advertising manager, promulgating the Power Company with both her poems and knack for window decorating. This is when she began her public speaking career.

In 1924, Lorain was devastated by the tornadoes--yet Helen was nicknamed "The Lorain Tornado" for her enthusiasm and optimism as a public speaker. She was becoming an extremely successful businesswoman and earned a reputation as a feminist. During her presentations she especially promoted what she considered "the important role women play in business." She saw women as partners in the work place, not as mere "decorations".

Helen was not much taller than 5 feet, but by the age of 25, she was a nationally known speaker. She criss-crossed the country giving speeches in the public service industry and was even invited to the White House to be photographed with President Coolidge!

During the Spring of 1927, Helen founded her own speaker's bureau. She called it "Steiner Service". She struck out on her own because of the many scandals in public utilities.

In June of 1928 Helen spoke at a bankers convention in Dayton. She agreed to a fee of $150.00 and expenses. Mr. Franklin Rice was assigned to escort Helen and after the presentation, they had dinner together. Franklin offered to send any newspaper clipping there might be in the Dayton local paper about her talk at the banker convention. Helen informed Franklin that stories reporting her presentations were usually on the front page. Several days later, Franklin used a chauffeur driven limousine to deliver the Steiner story to Helen in Lorain. It had been published on the front page.

Three months after their first meeting, Franklin, the vice-president of Dayton Savings and Trust chartered a yacht for a Lake Erie cruise. Two months after that they were engaged. The following January they were married at New York City's historic Marble Collegiate Church...only six months after their meeting in Dayton. On their wedding day, January 30, 1929, they boarded the S.S. Columbus for a honeymoon cruise to the Caribbean. It was a wonderful journey, but the poverty and squalor of Trinidad, Havana, and Panama affected Helen's sensitive nature.

After the honeymoon, the happy couple moved into a 14 room house in Dayton...complete with 3 expensive cars. Everything in life looked hopeful and promising!

Franklin invested most of their wealth in the stock market, but when it began to fluctuate, Helen wanted Franklin to stop buying securities. Franklin thought it was only a temporary aberration. It wasn't. In October of 1929, the market crashed bringing on the Great Depression. Within only a few months all of their money was gone. Instead they had countless bills. Franklin lost his job at the bank.

Several years later, Helen established ties with JR Gibson of the Gibson Art Company of Cincinnati. By December of 1931, she accepted a full time position as trouble shooter for their company. Franklin refused to sell their home in Dayton, so Helen agreed to live in Cincinnati, renting a room in the Gibson Hotel; the two would visit on weekends. Franklin was overwhelmed that he couldn't support their household. He became depressed and melancholy.

In her autobiography, In the Vineyard of the Lord, Helen wrote, "Then one day I came home from playing bridge with some of the ladies at the club and learned the horrible news...Franklin had gone to the garage, closed the door, started one of the cars and died of carbon monoxide poisoning." Franklin died on October 14, 1932. He and Helen had been married almost three years.

Franklin was buried in Zion Memorial Church Cemetery in Moraine, Ohio and Helen proceeded to work hard paying off their many debts. She worked diligently at the Gibson Art Company and when their editor died suddenly, Helen assumed her position.

Helen had wonderful and lasting friendships at Gibson and she loved her work. This is when she developed her strong ties to Willis D. Gradison, a very successful politician, and Sam Heed, a Gibson employee.

Helen wrote verses for the Gibson greeting cards; they were full of humor and clever wit. During her lifetime, it is believed Helen wrote several million poems.

By 1940, Helen Steiner Rice was widely acknowledged as one of the leading poets in the greeting card industry. She had a vivacious personality and developed a reputation for her impeccable attire...her gloves, beautiful purses, and fancy hats were becoming her "trademark".

In February of 1945, Helen was struck another painful blow. Her mother died suddenly of a heart attack. Helen's devotion to her mother and sister was always remarkable, but the loving bond she shared with Gertrude grew even more profound with her mother's passing. The two women shared every holiday together and wrote each other daily. Helen made countless trips to Lorain from her hotel room in Cincinnati.

Helen lived in the same hotel room on Fifth Street in downtown Cincinnati ever since she began work at Gibson Art Company. The people employed there were like family for her. She was particularly close to her maid, the maintenance supervisor, and elevator operator. She often gave them and others original poems she would compose. She suffered the pangs of menopause and weight gain during her 50's.

At the age of 60, Helen Steiner Rice, watched as Aladdin Pallante read her poem, "The Priceless Gift of Christmas" on the Lawrence Welk Show. This was national exposure that hugely increased her popularity. In time, other poems became nationally famous when they were read on the Lawrence Welk program: "The Praying Hands", and "Tribute to JFK" just after his assassination.

During the 1960's Helen's popularity soared and people flocked to buy her books of poetry, to get her autograph, and to meet her. Helen felt the pains of lost privacy and became increasingly exhausted as she tried to keep up with the demands of her popularity. She experienced pangs of discouragement.

At this time she also began publishing her hard cover books---Just for You was her first. Nine others would follow. She usually had her royalty checks sent to Christ Methodist Church in Lorain and to Wesley Chapel, where she worshipped in Cincinnati.

In her 70's, Helen suffered from arthritis and a deteriorating spinal condition. In 1971, after nearly 40 years of dedicated service, Helen officially retired as editor at Gibson, but she decided to remain affiliated as consultant and retain an office there. This allowed her to continue working with Mary Jo Eling, her secretary, as they attempted to answer her volumes of correspondence. Helen insisted, "I go there every day, but I'm working for God now, not for Gibson."

October, the month of her father's and husband's deaths, was always especially difficult for helen. Her memories of them would plunge her into a seasonal depression each year. In time, these melancholy periods intensified and Helen began to mistrust her own sincerity of purpose.

Another great hardship occurred when she was 75. The Gibson Hotel her home for 40 years, was to be demolished due to age and increased deterioration. Helen had to move into a suite at the Cincinnati club, not far away. But the inconvenience depleted Helen psychologically and physically. Her rib cage slipped over her right lung, cutting off most of her oxygen supply, resulting in heart complications. Depressed, short of breath, and limited in mobility, Helen lost 30 pounds because of the move. Some of the discs in her back deteriorated and she was hospitalized. She now needed to wear a back brace.

Fred Bauer, editor of Guideposts did a series of interviews with Helen which became her only published autobiographical source. Fred encouraged Helen to establish a Foundation so that her sizeable estate would be used to help the poor, the sick, the needy. Her dear friends Mr. and Mrs. Gradison had previously died, but their son, introduced Helen to a Cincinnati attorney who specialized in estate planning and a Foundation was established.

On April 23, 1980 Helen fell and broke her left hip and wrist. She would now live in the Franciscan Terrace Nursing Home in Wyoming, a northern suburb of Cincinnati. Good well wishes were sent by President and Mrs. Jimmy Carter, Pope John Paul II, and many others.

Helen had never earned a degree because she had given up her dreams of college to earn income for her family, but on March 14, 1981, in a private ceremony at the nursing home, the president of Mt. St. Joseph College, presented Helen with an honorary Doctorate of Humane Letters.

The following month, on the evening of April 23, 1981, at the age of 80---only one month short of 81--Helen died. Her body was brought back to Lorain and she was buried next to her parents. Twelve years later, her only sibling, Gertrude, would be buried in the family plot.

During Helen's life she published ten hardcover books of poetry, but since her death the Foundation in her memory has published about 65 more. Helen's legacy is one of talent, great insight, character, and immense compassion. 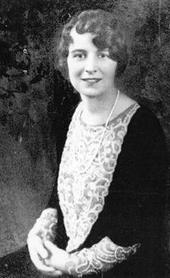 HELEN STEINER RICE, a world renowned poet and philanthropist, inspired millions of people and was the inspiration for the writer's group that would become IWA.

Below is an article published by the president of the International Writers Association/Friends of Helen Steiner Rice.